Nelson Mandela served as President of South Africa from 1994-1999. Nelson Mandela is famous for his determination, sacrifice, and quotes on Leadership. He was a revolutionary leader and social worker. These Nelson Mandela quotes will inspire you to become a better leader and help you overcome your fears.

1. “Education is the most powerful weapon which you can use to change the world.”

3. Do not judge me by my success, judge me by how many times I fell down and got back up again.

4. I learned that courage was not the absence of fear, but the triumph over it.

5. A winner is a dreamer who never gives up.

6. Forgiveness liberates the soul. It removes fear. That is why it is such a powerful weapon.

11. The greatest glory in living lies not in falling, but in rising every time we fall.

12. “I am not a saint, unless you think of a saint as a sinner who keeps on trying.”

13. “Death is something inevitable. When a man has done what he considers to be his duty to his people and his country, he can rest in peace.”

14.“In my country we go to prison first and then become president.”

15. A good head and a good heart are always a formidable combination.

16. There is no passion to be found playing small in settling for a life that is less than the one you are capable of living.

17. Poverty is not an accident like slavery & apartheid, it is man-made and can be removed by the actions of human beings.

18. “As long as poverty, injustice and gross inequality persist in our world, none of us can truly rest.”

19. When a deep injury is done to us, we never heal until we forgive.

20. Sometimes, it falls upon a generation to be great. You can be that great generation. Let your greatness blossom.

21. For to be free is not merely to cast off one’s chains, but to live in a way that respects and enhances the freedom of others.

22. In my country we go to prison first and then become president.

23. “Resentment is like drinking poison and hoping it will kill your enemies.”

25. “Lead from the back and let others believe they are in front.” 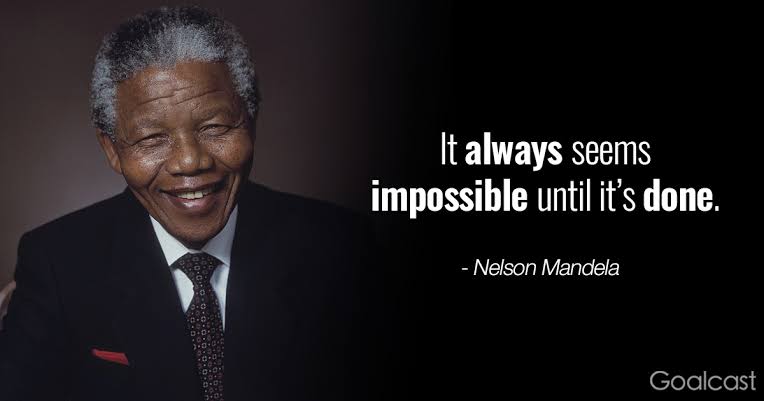 26. “For to be free is not merely to cast off one’s chains, but to live in a way that respects and enhances the freedom of others”.

27.” A leader… is like a shepherd. He stays behind the flock, letting the most nimble go out ahead, whereupon the others follow, not realizing that all along they are being directed from behind.”

28. If you want the cooperation of humans around you, you must make them feel they are important and you do that by being genuine and humble.

29. “I learned that courage was not the absence of fear but the triumph over it. The brave man is not he who does not feel afraid, but he who conquers that fear.”

30. There can be no keener revelation of a society soul than the way in which it treats its children.

31.“It is what we make out of what we have, not what we are given, that separates one person from another.”

32. I dream of an Africa which is in peace with itself.

33. “There is no easy walk to freedom anywhere”.

35. A nation should not be judged by how it treats its highest citizens but its lowest ones.

36. Everyone can rise above their circumstances and achieve success if they are dedicated to and passionate about what they do.

37. There is nothing like returning to a place that remains unchanged to find the ways in which you yourself have altered.

38. Let freedom reign. The sun never set on so glorious a human achievement.

39. “As we let our own light shine we unconsciously give other people permission to do the same”.

40. We must use time wisely and forever realize that the time is always ripe to do right.

41. We can change the world and make it a better place. It is in your hands to make a difference.

42. Difficulties break some men but make others.